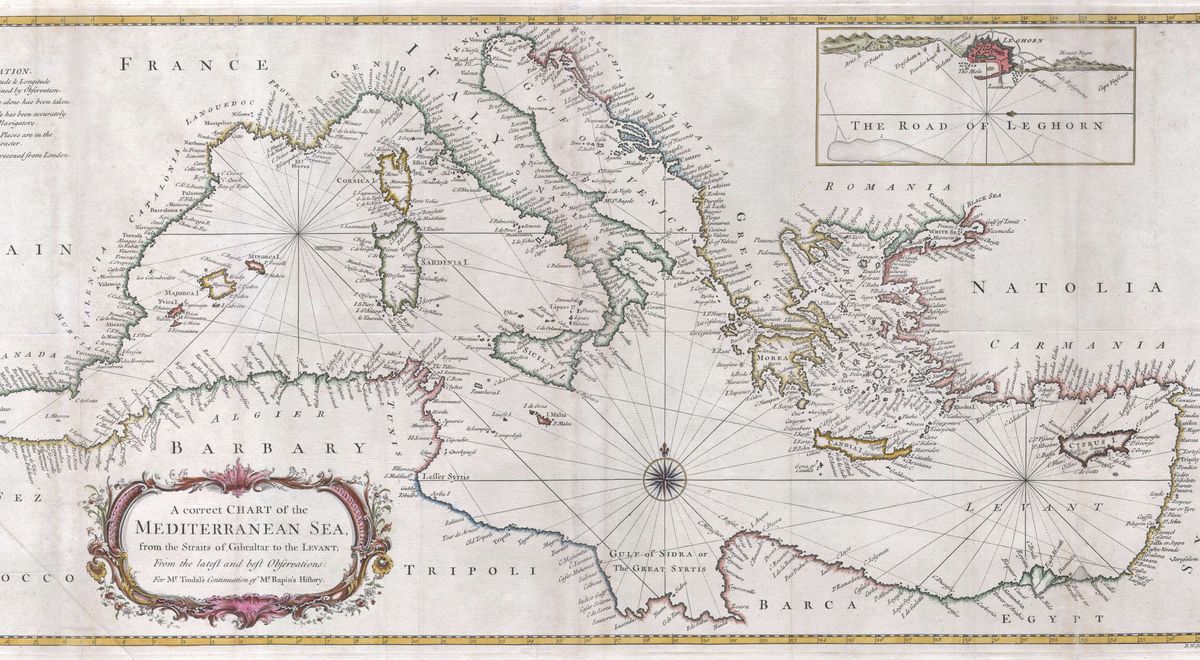 Manuscripts , Diplomacy
These newspapers presented to British audiences a view of Maghrebi diversity, and diplomatic relations with Europe free of anti-Maghrebi rhetoric.

Historians often argue that most early modern British people knew little or nothing true about the Maghreb or its people; informed by fictionalised, polemical, allegorical and occasionally factual accounts, Britons viewed Maghreb as alien, dangerous, undifferentiated and chaotic. As part of my research into British expatriates who lived in the Maghreb (see my first three blog posts), I wanted to understand how true this was for them, and how they might have contributed to changing the narrative at home. I realised that a great way into the information they might have received was to look at periodical news, that is, newspapers. The seventeenth century was time when regular newspapers started to take off in Britain, and these publications were positively devoured by British audiences – more than 30,000 individual issues were published before 1700, and each issue could be hundreds or thousands of copies. While literate, male, middle-class Londoners like my expatriates were a key audience, newspapers were passed between acquaintances and read aloud in public, so the news and views they contained reached a much larger proportion of the British population. 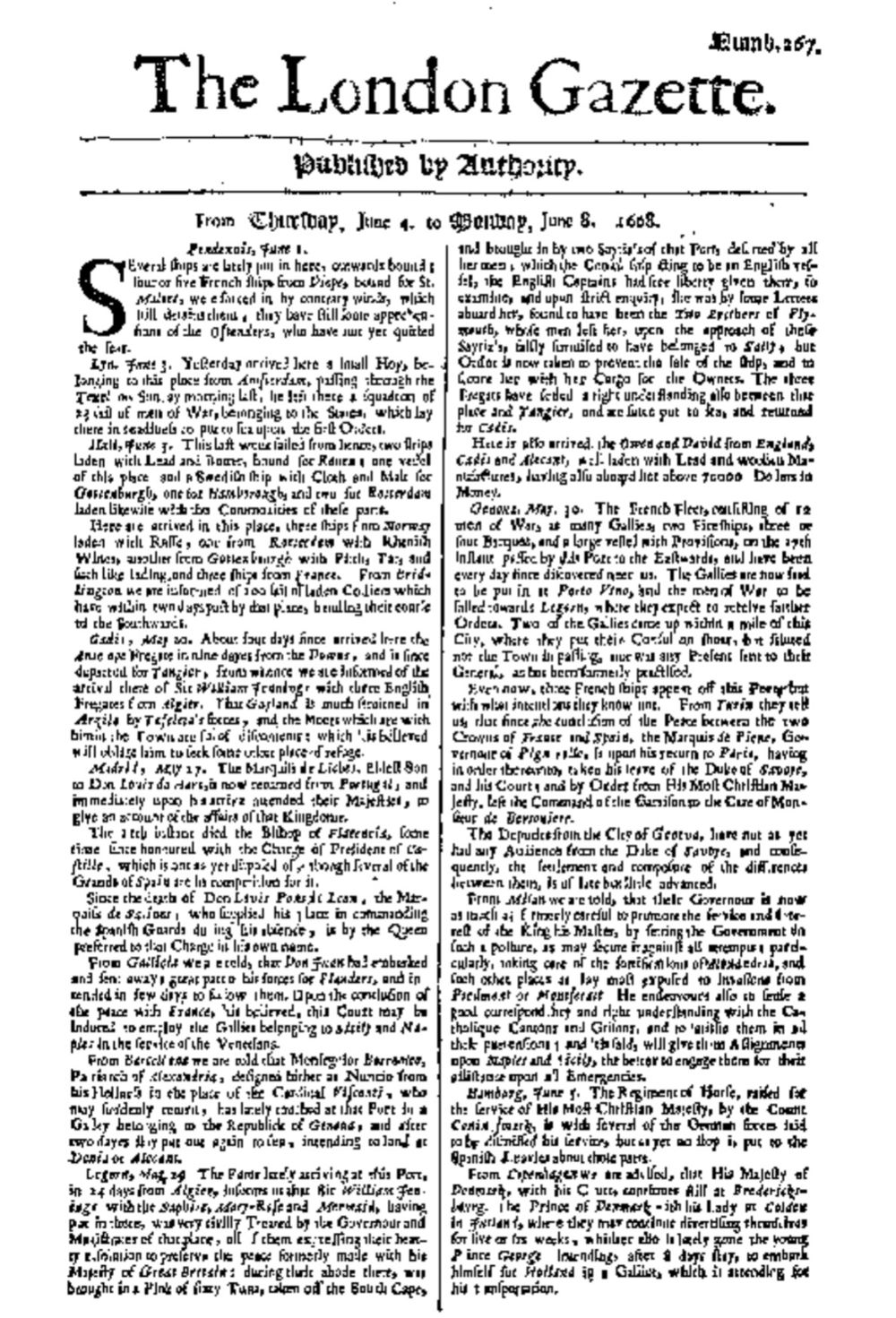 A copy of the London Gazette, dated 4-8 June 1668, containing several stories relating to the Maghreb.

Coming from foreign news based on eyewitness accounts, and often backed by government authority, the major newspapers gained a reputation for up-to-date and reliable information to the extent that they were used in court cases and historical research. Looking at these papers, I found thousands of items that together presented to British audiences a view of Maghrebi ethnic, political, and religious diversity, and diplomatic relations with Europe and Britain, that was robust, detailed, and largely free of the anti-Maghrebi rhetoric that appeared in other publications.1 I’ll talk more about the content of this material in future posts, but for now, I want to talk about how newspapers got their information in the first place, which will help us understand why it was such high-quality. Official government papers, like the London Gazette, got their foreign news mainly from consuls living in foreign countries, so we can match up some letters sent directly to London from the Maghreb to articles that got printed there. But there were plenty of non-government papers, who drew their information from other places, and lots of articles in the Gazette talk about the Maghreb but don’t come straight from there. So how did they get the news? To answer this, we need to use the letters that I’ve been working with, which describe how news was part of the daily life for expatriates.2 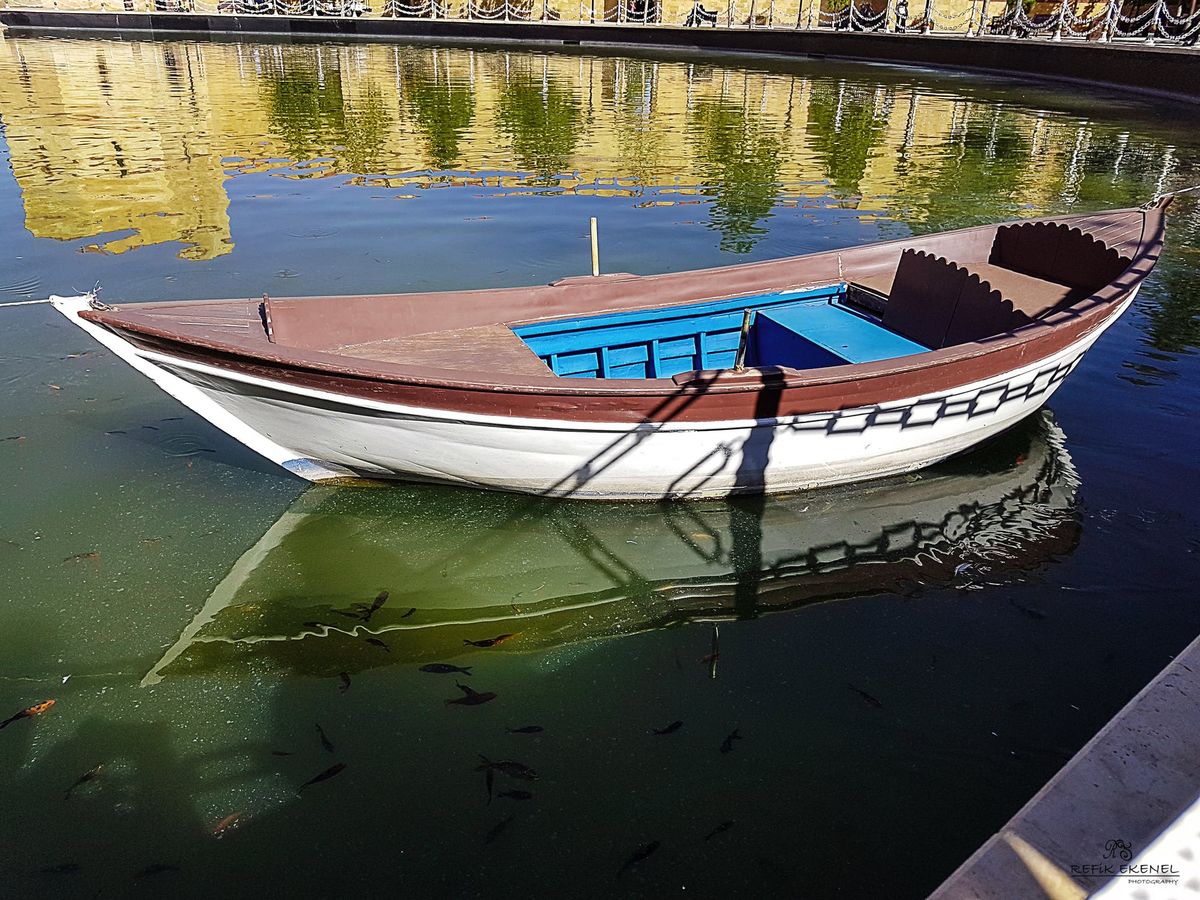 News stories naturally always begin with what happened, and how the first recorder learns about it. Sometimes expats in the Maghreb would be eyewitnesses, like Francis Barrington in 1683 Tunis: ‘The ffrench are still riding att the Goletta3; going Inn & out to amuse these people; but meeting with an Algiers [corsair] they contrary to all rules of Civillity & good manners burnt her’.4 Given the consulate’s position on the harbour, Barrington could have seen the action from his bedroom window. But more often local news came from Maghrebi colleagues and informants, as merchant James Chetwood was told by Muslim colleagues in 1697, ‘that there was a hot report in towne & Country that 30 or 40 french Galleys were coming on this Coast, and that the french Consull was fled away from Tunis’.5 Once they had news, expatriates would send it to each other around the Maghreb. Often, they wrote things down in letters, but writing was often a challenge: they needed good supplies of pens and ink and paper, and the time and physical fitness to write. They also needed a reliable way to get the letters where they needed to go: this could be by hamalls (porters for hire), sandalls (local fishing ships), caffaloes (camel caravans), or by larger merchant, corsair or navy ships, and each of these could be diverted or disrupted. Local officials intercepted European correspondence, roads were rendered impassable by rain, stormy seas delayed or sunk ships, and hamalls might charge more money to travel as fast as required. Another option was to tell news to a friend who was travelling and have them pass it on by word of mouth, but it was really important to have someone both the writer and the recipient trusted on board: ‘This you’l receive god willing from the hands of our very deservingly esteemed freind Mr James Chetwood whome haveing discours’d amply about ye affairs tending to the Trades of your & this place leaves not matter for further adition referring you wholy to him’.6

Richard William Seale, A correct Chart of the Mediterranean Sea, from the Straits of Gibraltar to the Levant: From the latest and best Observations: for Mr. Tindal’s Continuation of Mr. Rapin’s History, 1745, ink on paper, 35.56 × 72.39 cm.

From here, expats would send news to their friends and business partners in Europe, usually in writing on merchant ships. British letters from Algiers, Tunis and Tripoli went all over the Mediterranean – to Livorno, Marseilles, Genoa, Alicante, Cadiz, Venice and elsewhere. Sometimes these letters were lost as well, particularly in times of war. Once they got the letters, Europeans would forward letters on, take out bits of news for their own letters, and pass information on to Italian, French, or Spanish newspapers, so that expatriate information also came to Britain (sometimes in garbled form) by way of European connections. Expatriates also corresponded directly with partners, friends and family in Britain, sending very specific news – sometimes as part of their letters, and sometimes as stand-alone pieces. During the 1680s, the consul in Tunis prepared a manuscript newsletter which he called the ‘Tunis Gazette’, and his colleagues in London esteemed it as ‘the most Methodicall way of writing occurences that can be invested & pray Continue to favour us in the same manner’.7 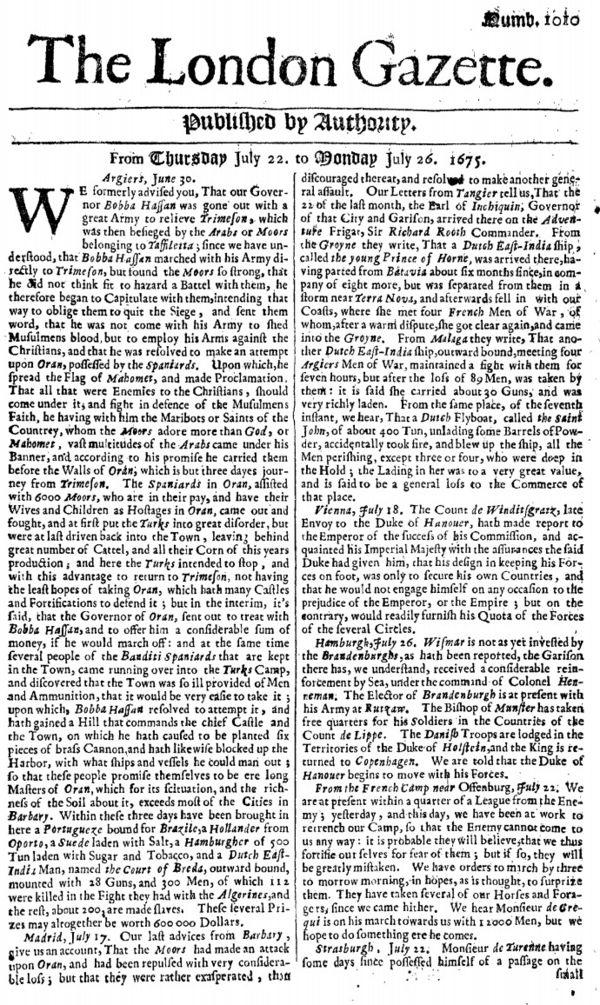 Consuls, because of their official role, were also expected to provide news to their superiors in government, but often sent these reports to their merchant colleagues to be checked before sending them on. These letters were designed to convey facts without personal comment, which served the objectives both of merchants and politicians, but sometimes consuls didn’t cooperate: ‘Wee are resolved to carry up your letter to the secretary but are sorry to finde in itt so many satyracall axpressions upon the french nation; which pray for the future leeve out and advise onely plaine matters of fact’.8 The Secretary then checked the material before passing selections onto newspaper editors to be printed; but expatriates also sometimes wrote directly to newspaper editors, giving them the information they wanted and bypassing official channels. In general, editorial changes before printing were small, and geared towards enhancing the freshness, detail and polemic-free factuality that already characterised the letters they received. Because of this, and the good material they already contained, expatriate letters and government papers were the gold standard for reliability. 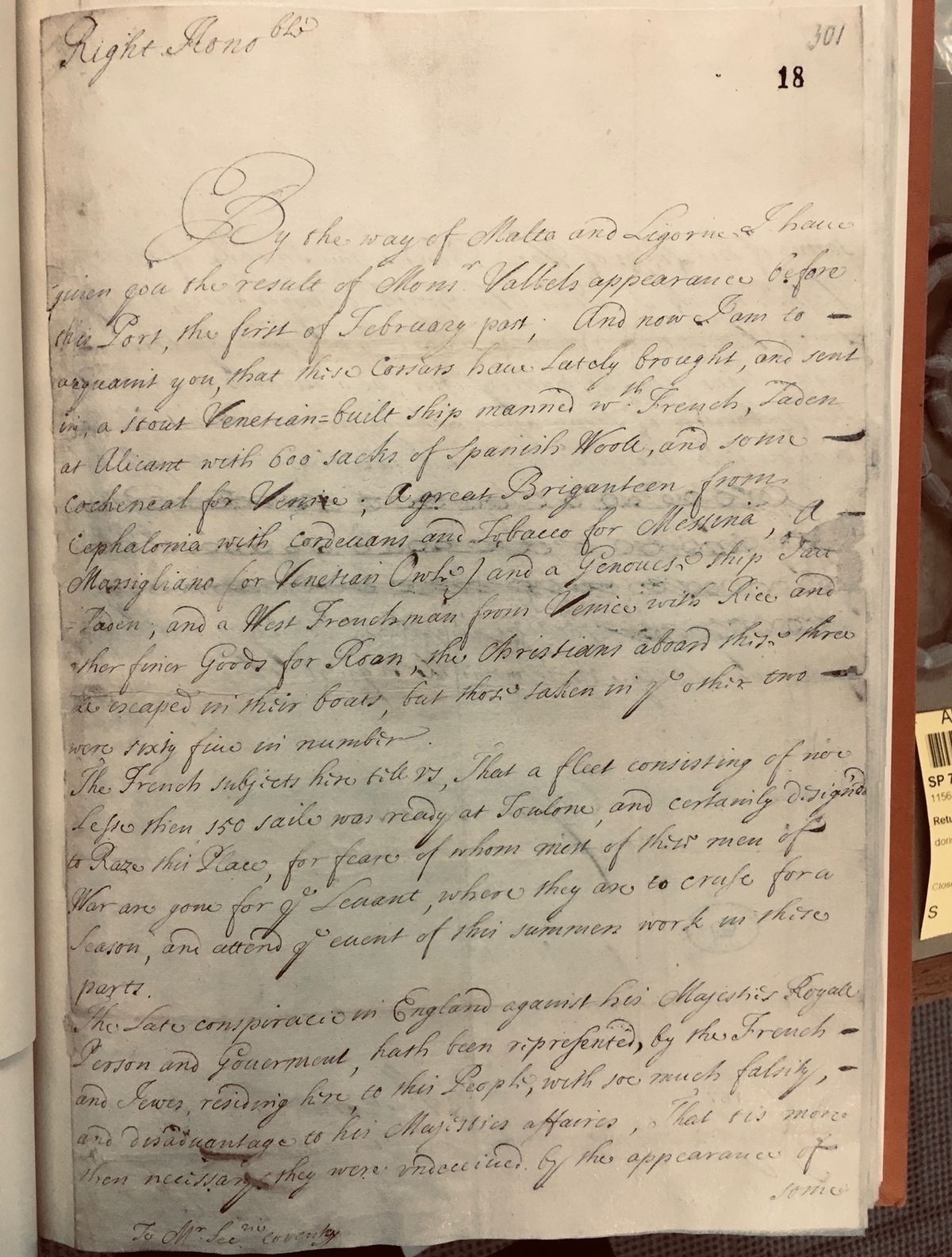 News stories about the Maghreb were popular in Britain – everyday people were interested in the exotic places, exciting battles and brutal captivity stories, and merchants and government officials needed to know about new trade opportunities and diplomatic relationships to do their jobs well. We can find news stories about the Maghreb copied down in people’s diaries, reprinted multiple times in different London papers, and then printed again in Irish, Scottish and regional English papers (more about this coming soon!) But it wasn’t only to Britain that news travelled; people in the Maghreb wanted news about Britain as well. So, expats were constantly asking for newsletters and newspapers from Britain and passed them around to each other. They were mainly interested in politics and trade, rather than more social and cultural information that filled some papers: ‘That you professe your selfe incurious about Newes, Gazetts and those sort of Peepers I rather esteeme a vertue, then object as a defect in humour, since such kind of inquiries are meerly superficiall and really concerne us not, Whether such a day Mr Lord Mayor went a hunting or not’.9 Expatriates used their privileged access to European news carefully, competing with other Europeans in the Maghreb to present their country as the most trustworthy, honourable and admirable, and so attract personal and national advantage. This sometimes went well, as in 1692 the consul in Tripoli reported after an English victory against France, ‘we have Celebrated here in the most publique manner we could; the Turks & moores allso rejoyceing with us’, and sometimes not so well, as after the Popish Plot in 1680: ‘The Late conspiracie in England against his Majesties Royall Person and Government, hath been represented, by the French and Jewes, residing here, to this People, with soe much falsity, and disadvantage to his Majesties affaires’.10

These information flows help us to understand how new kinds of information started coming to Britain in the second half of the seventeenth century, contributing to a shift in public perceptions away from the kind of fear and admiration we see in Shakespeare’s time towards increasing pragmatic cooperation. Expats and governments wanted to work with Maghrebi peoples, rather than fight wars with them, and so their letters and the news they published reflected this to the people. There were still plenty of other documents that were negative towards the Maghreb, but the large quantity and regular flow of information that came out this way makes it really important to include when we try to evaluate the overall British views of the Maghreb, and Maghrebi views of Britain too.

'This blog post is based on the essay Nat Cutter wrote on ‘Grateful Fresh Advices and Random Dark Relations; Maghrebi News and Experiences in British Expatriate Letters, 1660-1710’ that won the 2021 Hakluyt Society Essay Prize'.

[2] For a significantly larger account of these information flows, see my forthcoming ‘Grateful Fresh Advices and Random Dark Relations: Maghrebi News and Experiences in British Expatriate Letters, 1660-1710’, in special issue of Cultural and Social History, edited by Giada Pizzoni. 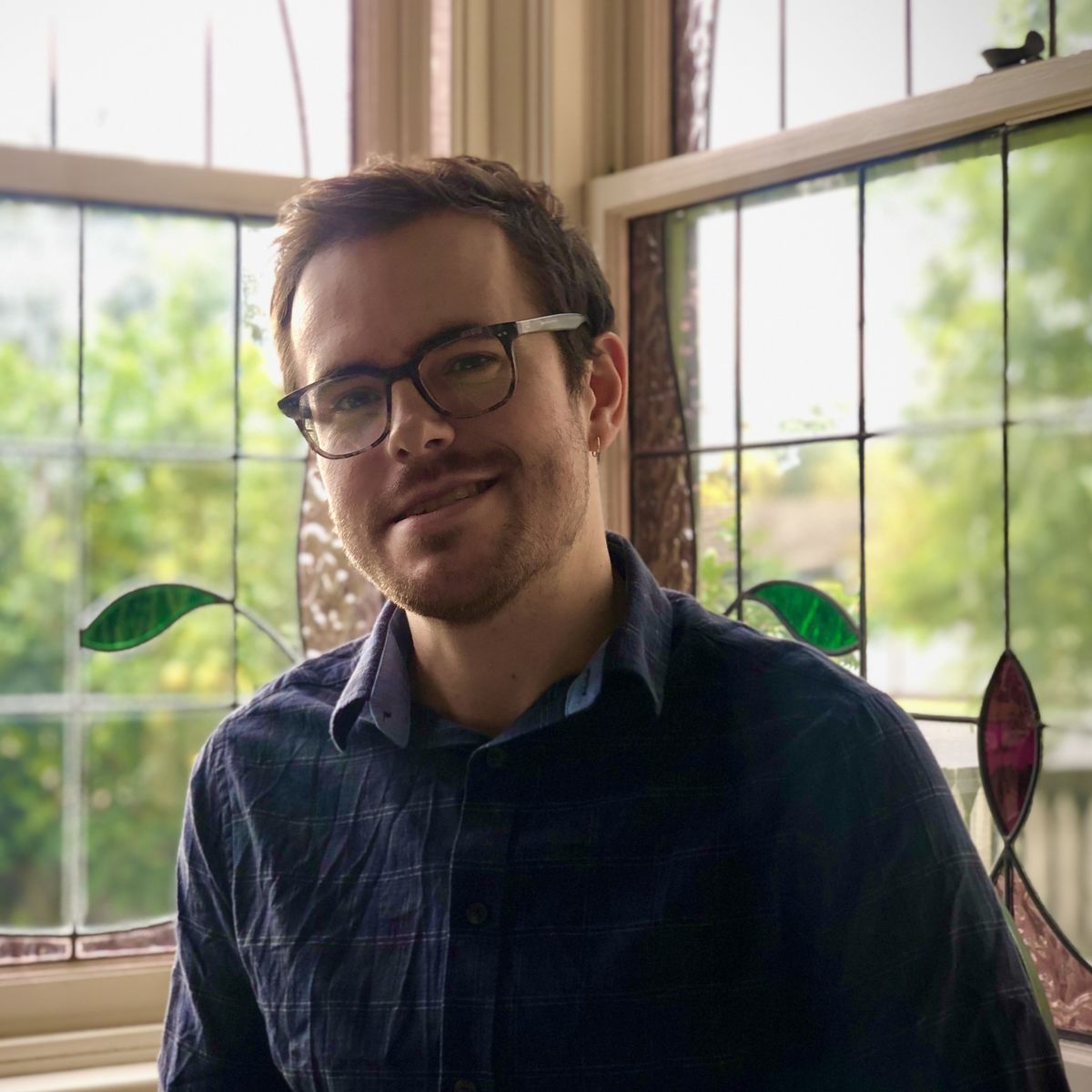