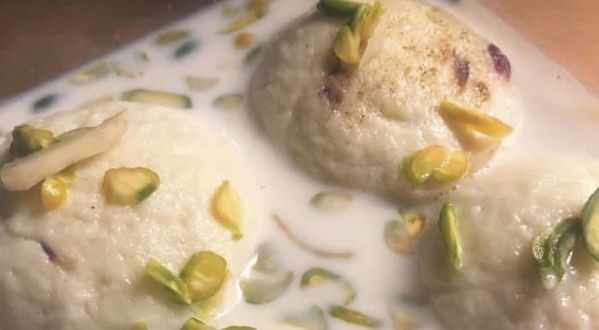 From Portuguese, to Mughal, to British India: Vasco De Gama and Ras Malai

Vasco De Gama, Count of Vidigueira, a Portuguese explorer was the first European to reach undivided India during the Mughal era at Calicut on Malabar coast by sea on 20th May 1498. That was finally a story of success! For decades before this first European landed and finally discovered the sea route to India, sailors had tried to reach the Indies, thousands of lives were lost, and dozens of vessels damaged in shipwrecks and attacks. Vasco De Gama was on an exploratory mission but subsequently his discovery helped boost the economy of the Portuguese Empire. One hundred and a fifty years later, the Dutch, English, French and Danish East India Companies found their way to India as well!

In the Mughal capital of Delhi, the Portuguese presence was barely noticed, but the tiny Iberian nation had a massive impact on eating habits throughout South Asia. While they introduced chillies, tomatoes and other American imports to the region, pepper and cinnamon were introduced for the first time to Europe through them.

The Portuguese settled in two communities in India: on the west coast of Bengal and Goa. A burst of fusion cuisine sprang up with the marriage of local ingredients and imported techniques. The Bengali Portuguese settlement, however, was small and never formed a cohesive community. In South Asia, sweetmeat is the speciality of Bengal. Portuguese cuisine had little impact on Bengali desserts and sweets compared to other savoury dishes. It was the newly introduced Portuguese and European techniques of viticulture, distillation, oven baking, yeasted dough, sugarcane processing, deep-frying, roasting, and stewing that gave a twist to the ways in which locals had been cooking their beloved indigenous ingredients.

Several Portuguese expeditions came to India until Goa was captured by the governor of Portuguese India in 1510. During the Mughal era (1526 onwards) there were two new communities simultaneously growing in two different parts of the region – on the west coast in Goa and the other in Bengal - but approaches for assimilating the newly arrived techniques and ingredients were drastically different. The Portuguese cooking techniques were embraced in Bengal, but the local ingredients retained their identities, while in the coastal city of Goa, it was quite the opposite.

The dessert in the picture did not come into being until the nineteenth century. Even when the first Bengali cookbook was produced in 1831, there was no mention of Ras Malai. The words Ras Malai in Hindi/ Urdu etymologically are taken from the Bangla word Rossimalai; Ras (in Hindi/ Urdu: juicy) from Rosh in Bangla, and the word Malai, which means cream. Ras Malai is a melt in the mouth delicacy, slightly like creme caramel and reminiscent of Italian cheesecake but without a crust. These sweetened curdled cheese balls are immersed in clotted milk infused with rose water - an all-time favourite ingredient of the Mughals.

The confectionary empire K.C. Das Grandsons claim that their forefather Krishna Chandra Das was the creator of Ras Malai, in the early years of the 20th century. His father Nobin Chandra from Brudwan, a city which came under British rule in the 1770s, later moved to Calcutta and opened a sweet shop. According to K.C. Das Pvt. Ltd,[1] “It was a humble beginning. In a tiny, obscure corner of Bagbazar in North Kolkata, Nobin Chandra set up a sweet shop in 1866.” He wanted to create a sweet which was completely original, something never tasted before. Nobin Chandra probably specialised in sandesh – a characteristic Bengali curd cheese confection. It was here that through a long period of trial and error he invented rossogolla – a similar kind of dessert to Ras Malai but in thick sugary syrup instead of milk. While the ingredients of rossogolla are simple, the technique of combining chhana - Bengals’s secret fudge- with flour can be tricky. Chhana (also spelled chhena) is fresh curd or kind of cheese, moist like ricotta and almost always used in sweets. According to Robert Montgomery, an EIC functionary describing the technique of making chhanna in 1833 says: “The chhana or curd is prepared by boiling the milk, and by adding to it, while hot, some acid milk, which coagulates the whole into one mass”. While other claims are also made about the origin of rossogolla, it was K.C. Das who carried the legacy of his father and on opening his new confectionery shop in 1930 popularised a sustainable recipe. Finally Ras Malai- sweet, but not as sweet as other South Asian desserts, was born.

After thousands of dead sailors, and thousands of unsuccessful voyages to find India, it took one Vasco De Gama with his team to discover the route, and just like dominoes fall on each other, one by one, the discovery by the Portuguese and introduction of cheese-making led to a new trajectory in South Asian cuisine.

Like Vasco de Gama’s numerous unsuccessful attempts to reach India, it took me several attempts to get to grips with the recipe. While the techniques and ingredients are simple, it takes some trial and error to perfect it if you are making it with the help of a cookbook alone, without a mentor who has cooked it before. It’s that delicate. But. But. But. It’s not mission impossible. It does take a few shipwrecks, a few lost and broken ships in the form of those cheese balls in the milk to get the technique right. Once you pass that narrow and delicate test of not breaking the cheese balls while cooking them in the milk, just as Vasco de Gama’s expedition reached the Indian Ocean, you will find your Indies! You will. And just like the Portuguese expedition and all other voyages of discovery in life, once you reach a new destination and a new land, it’s much easier for others to follow and replicate the journey.

Alia Amir is a Lecturer in English Linguistics at Uppsala University with a PhD in Language and Culture in Europe from Linköping University in Sweden. Her research interests are English language policy in British India, Pakistan, Turkey and Sweden. She tweets @aliawhs.